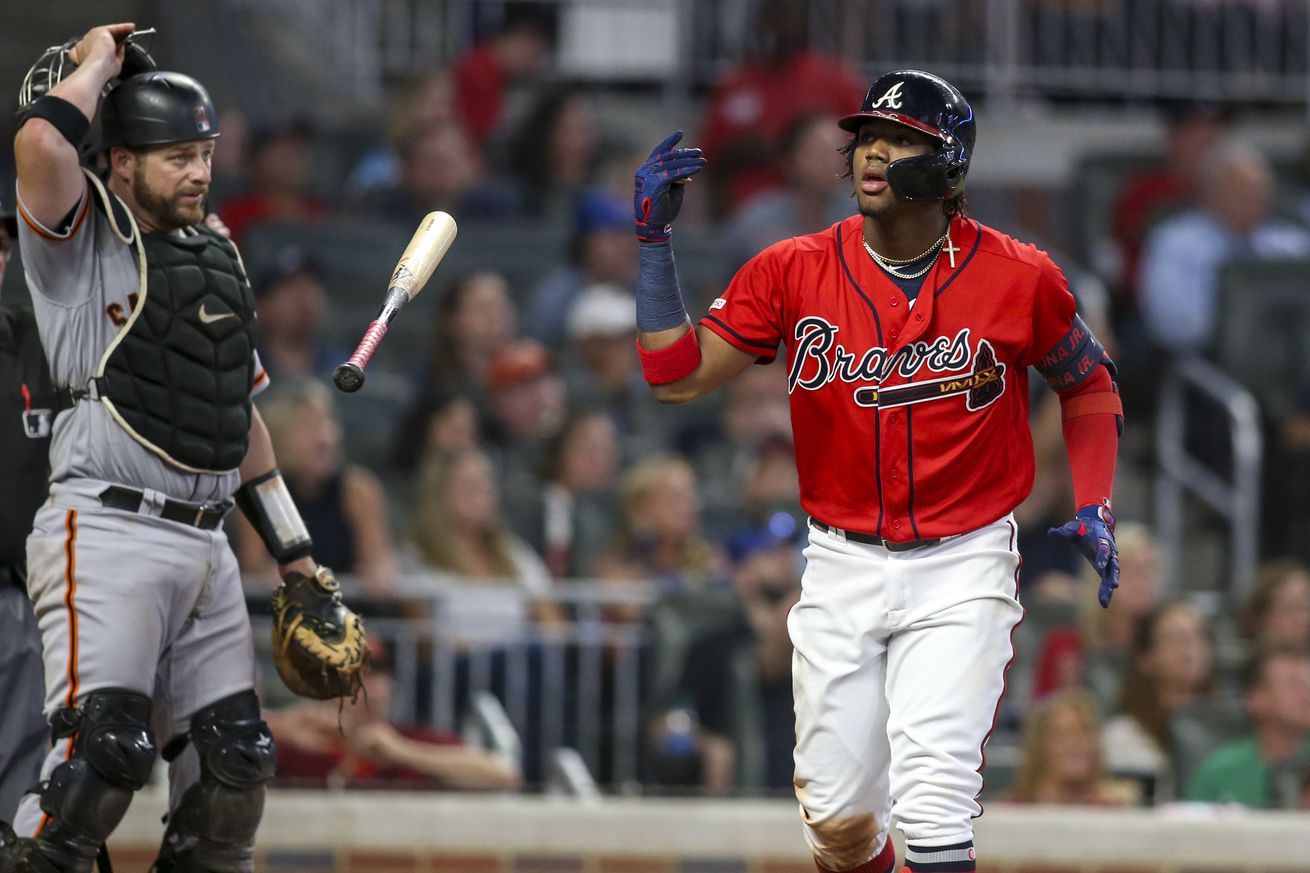 The Braves clinched their second NL East title in a row. Get used to it, folks.

There was a brief time in my life where the Atlanta Braves didn’t win the NL East every year, but that time is over now. For the second year in a row, the Braves have clinched their division, and they did it with two guys they have locked up on the cheap for the next decade. With all the money they’re saving on Ronald Acuña Jr. and Ozzie Albies, you know they’re going to fill out their roster with ringers and go on another stretch where they make the playoffs every year for at least the next 10.. If Josh Donaldson isn’t manning third next year, it will be Anthony Rendon. Mikes Foltynewicz and Soroka will be joined by Gerrit Cole. No one will be safe.

At least the Braves will be somewhat benevolent overlords. The Braves could have had Mark Melancon out to pitch the ninth and clinch the division against his former team, but no, they went with Josh Tomlin instead. I suppose the Braves value resting their closer before the playoffs more than being extremely petty.

While I’m glad we were spared from watching Melancon get mobbed by his teammates, I’m happy that he’s going to the postseason. I am a little anxious about watching him try to close games against the Dodgers in the NLCS.

After three games against the Red Sox, a team that has played six nine-inning, four-hour games, tonight’s game was a welcome change. This game only took 2 hours and 21 minutes. The Giants and Braves could have played this game twice in the time it took to play Tuesday night’s game, and they still would have had an hour to spare. Tyler Beede made quick work of anyone not named Ozzie Albies or Ronald Acuña Jr. and Mike Foltynewicz couldn’t be trifled with the Giants offense.

Beede’s final line looks pretty ugly, but almost all of the damage against him was done by Ronald Acuña Jr. and Ozzie Albies. Beede didn’t have a lot of trouble with the rest of the Braves lineup. Sure, he got a little lucky with where the other Braves hit their balls, and Kevin Pillar and Brandon Crawford made two excellent defensive plays behind him. But he got a lot of quick outs and made some good pitches. He even made Josh Donaldson look absolutely silly on a changeup in the dirt. Part of the way through his swing, Donaldson realized he had no chance of making contact so he simply hucked his bat at the ball. Unlike Javier Báez or Vladimir Guerrero before him, Donaldson did not make contact.

Against Beede, the three through nine hitters were 3-for-19 with a home run and a walk. Albies and Acuña were 4-for-5 with a double, a homer, and a walk. Acuña took a first pitch curveball from Beede and took it to the opposite field.

If the Braves only faced the Giants for the rest of the year, Acuña certainly wouldn’t join the 40/40 club. With all the dingers and doubles he’d hit, he wouldn’t have enough opportunities to steal the three bases he needs. I suppose he could try to steal third, but his buddy Albies would just knock him in before he got a chance to take off.

The Giants had just as many answers for Mike Foltynewicz as they did for Acuña. It’s impossible to be mad at the offense. What were they supposed to do? Just look at this sequence to Stephen Vogt.

Just a gorgeous 3 pitch sequence from Folty to get Vogt swinging.

The only time McCann ever had to move his glove was when Folty’s slider broke the laws of physics.

That Mike Foltynewicz didn’t throw a complete game shutout is a moral victory. It’s also an indication of just how hard it is to throw one in 2019. The only way that Foltynewicz went out for the ninth is if he was under 90 pitches especially when the Braves need him for the postseason much more than they need him to get three outs against the Giants.

The non-Yastrzemskis may not have done anything interesting on offense, but Pillar and Crawford made those two plays to bail out Beede. Pillar laid out for a ball in left center that was probably hit closer to Alex Dickerson than it was to Pillar.

Pillar would later be taken out of the game which was unusual. Pillar almost never misses an inning, so it’s only natural to assume that he tweaked something, but he was just double switched to get Jaylin Davis in the game. It’s a good thing that Pillar isn’t hurt because he is currently in the midst of a two-game walk streak. If he extends that streak to three, it will be his longest since April 23-25 of 2017. If he can somehow make it to four games with a walk, it would be the longest streak of his career.

The odds are against him doing that. Pillar has only walked in 2.8 percent of his plate appearances this year. Somehow, Tim Anderson has him beat at 2.5 percent.

The Crawford defensive highlights have been scarcer than they have been in years past, but when they happen, they’re still just as good. Crawford reprised his catch at the Oakland Coliseum from last season with another catch in foul territory.

Brandon Crawford was playing in his regular spot, even a little towards second, and ended up here somehow: pic.twitter.com/Fys7bAz8YO

Crawford may not be very fast, but he still has excellent instincts and sure hands. That slide says he knew exactly how much space he had before he ran into the fence and where exactly the ball would land. Hopefully, Crawford can create a few more highlights before the season’s end. We’ll need them to keep warm in the long winter to come.

Do the Giants have their best bench of the century?

Century Links 9/20: Will Dissly making a a Strong Comeback