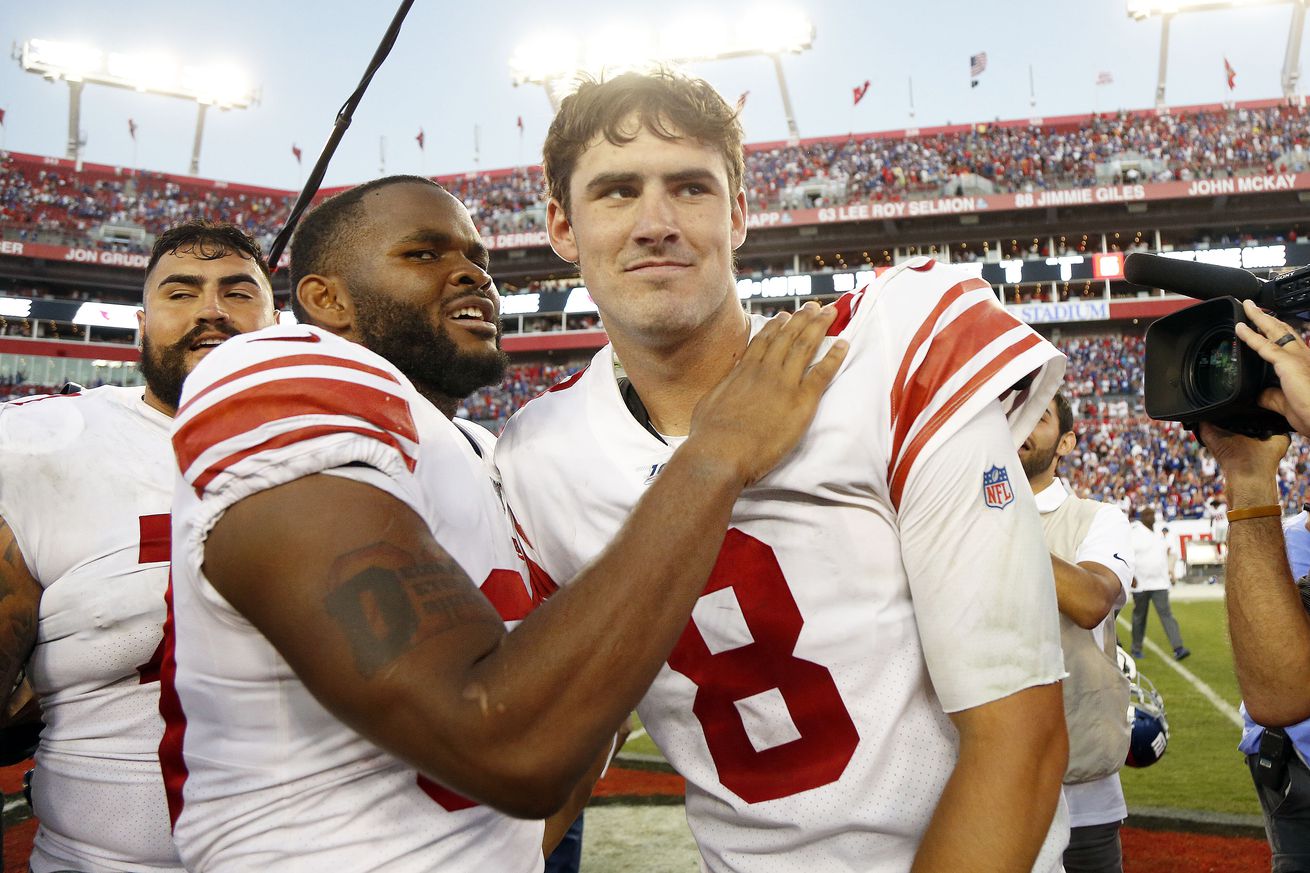 Backup QB’s are the new black, Freddie Kitchens is new Hugh Jackson, and the Dolphins actually scored points (six of them!)

Worrying about all the marquee QB’s out with injuries is so last week. Embracing the backup QB is all the rage. No less than five backup QB’s led their teams to huge wins this week, four of them coming on the road, three the first win for 0-2 teams.

A sixth backup, Mason Rudolph, almost scored a fifth road win and fourth first win of the year, but in the end, he got Jimmy G’d. Two more, Josh Rosen and Luke Falk, also got starts for 0-2 teams, but that was more of a sacrificial lamb thing.

The first of this week’s two(!) bonus lists rank the performances of those backups.

Jones didn’t put up the accuracy or TD numbers. The next two on this list did, so you can see this isn’t just about the stats. Still, look at those stats!

Jones not only led the 0-2 Giants to a huge win on the road, but he also had to engineer a comeback from 18 points without his best weapon.

Daniel Jones is 1-0 when trailing by 18+. Eli Manning is 0-44 in those games in his career. pic.twitter.com/FobTzn0pLr

It only took him one game to make Giants fans forget about Eli Manning.

It was his first NFL start after the Giants faced tons of ridicule for picking him so high. That’s a lot of pressure. He came through like a champ. Super impressive.

Allen engineered a huge win for an 0-2 team, on the road. That should never be taken lightly, even if it came against the Cardinals. And it may not have been a fluke: Allen also played well in his only other start -- 2018 Week 17: 20/31 266 2/0 113.1 rating. So maybe it’s not all that surprising the Panthers have already greenlit Allen’s next start. If he beats the Texans, will there be a QB controversy brewing in Carolina?

Okay, this could be considered cheating, but Brissett was the backup heading into camp, so I’m counting it. And if this was about my confidence in the backup moving forward, I might have Brissett first. But since I’m only considering Week 3, Brissett gets dinged for having much more experience than Jones or Allen. Still, his accuracy was very impressive.

Minshew commanded the Jags to a huge divisional win on the road for an 0-2 team. He might’ve done it twice in a row if his coach gave him a chance. Suddenly, Jacksonville’s lost season doesn’t seem so lost.

Bridgewater led the Saints to a huge road win, but he didn’t throw the ball downfield all day. New Orleans only had 265 yards on offense and won mainly because they got a TD from both their defense and special teams.

Back due to popular demand more bad coaching!

Some old favorites flirted with this list. Anthony Lynn called a timeout that could’ve cost the Chargers the game, but it turned out his team was able to lose it without his help. Mike Tomlin had a chance to call a timeout before the half to help his team, but apparently, he preferred to go in for the half. Maybe he had to pee.

Mike Tomlin has 3 timeouts left on second down for 49ers on 49ers own 15 with 43 secs left and a SF offense that’s coughed up 4 TOs already .. and of course he lets the clock run out. There’s been some horrible coaching today.

But those guys didn’t rise sink to the level of the medal round. Let’s take a look at who did, including an old friend and new star on the rise.

I hate to single Arians out for the second straight week, but he practically begged for it. After blowing an 18-point lead to a rookie QB making his first NFL start, the Bucs pulled off a miracle, moving the ball 66 yards in 63 seconds, the last 44 coming on a Hail Mary to Mike Evans to reach the Giants 13. Despite having a timeout left, the Bucs ran down the field and spiked the ball to leave: 13 left.

Their kicker Matt Gay had already missed two extra points on the day, so you might think Arians would take a shot or two at the end zone. Or maybe they’d be more conservative and run the ball, trying to edge a little closer, then call a timeout and kick. Instead, Tampa took a delay of game. The clock wasn’t running. There was no rush. They just didn’t run a play. And here’s the thing: That was the plan.

Bruce Arians took the delay of game penalty on purpose in the last minute.

He said he thought the FG would be easier for Matt Gay if it was further away. pic.twitter.com/RCvviggYnX

And with time left on the clock, Arians ordered Jameis Winston to center the ball, which he did, losing a couple more yards. So a 27-yarder became a 34-yarder, which Gay missed by, oh, I’d say about a foot.

Is that kick good if the Bucs don’t take that delay of game?

Your kicker misses two extra points from 33 yards, so you move a 27-yarder back to 34?

Kitchens has appeared in over his head all year, but no more so than in the first fourth quarter of a close game he had to manage. After the Rams took the lead 17-13 early in the fourth quarter, Cleveland moved the ball to the Rams 40. With less than 10 minutes remaining, the Browns faced a 4th and 9. That’s when Freddie formally introduced himself to a nation. He called a draw. Nick Chubb was stopped for two yards, and the announcers immediately seized on the choice. So did the internet.

Us: “How can the NFL coaching get any worse today?”

Just setting up a 5th and short

It wasn’t just a stupid decision, it was somewhat historic.

Looking through the @pfref play index and I don’t think I can find a fourth-and-8+ play where a team deliberately handed the ball to a running back before tonight since Bernie Parmalee in 1997.

Despite having three timeouts, and Nick Chubb’s success on the ground (96 yards on 23 carries while being used sub-optimally) the Browns went with empty backfields and no threat of the run.

Apart from the condensed set on 2nd down (sprint-right), every single play:

This allowed the Rams rush to tee off on Mayfield, who was backpedaling and rushing his throws throughout the series. Turns out, having three or more WR’s on the field has been a problem for Cleveland since last year.

Due to the Rams all-out rush, the QB draw was available the entire series. Had Kitchens called it, or Mayfield spotted it -- as #DannyDimes did on his game-winning TD -- Cleveland ties the game.

Making matters worse, Kitchens took a timeout before the 4th down play, so once they didn’t score he couldn’t force a punt out of the Rams end zone.

Freddie calls timeout on fourth down to guarantee he can’t get the ball back if they don’t get it... stupendous!!!

After the game, Kitchen admitted mistakes. But don’t worry; he’s not giving up yet.

Week 3 is when preconceived notions really start melting away. It becomes harder to ignore the records, and just focus on the talent.

How good is Patrick Mahomes? His team has to be in the top tier because he’s on it.

Mahomes puts on a show even with his starting RB and best WR out with injuries.

They’re not as good as the Chiefs and Patriots but could conceivably beat them.

Aaron Rodgers and one of the best defenses in the league is a powerful combo.

They have good records. They’ll probably make the playoffs. But I don’t see these teams as true title contenders in their present state.

The offense without Brees is still a concern moving forward.

Tier 4: Better Than Their Record

You’ll just have to take my word for it.

The Eagles are already very injury-depleted, missing players all over the field. And without Alshon Jeffrey and DeSean Jackson. Nelson Agholor has picked a bad time to drop passes, of which the Eagles had seven on Sunday.

but this is so incredible and hilarious, I've been watching it all day https://t.co/OdaRda80IE

But I believe in the roster, and most of their injured players should be back before long.

Tier 5: Not Pretty, But Pretty Effective

They’ve had some ugly wins. But it beats pretty losses.

State of the Niners: At rest.

And they need it. They’ve lost a key, hard-to-replace player from each side of the ball the last two weeks, and an extra week of rest, recovery, and practice might be just what the doctor ordered. And while the Joe Staley and Akhello Witherspoon injuries are certainly daunting, one can only be impressed with how the team has moved the ball on offense, and stopped their opponent on defense. Sure, there’s the little matter of five turnovers, but that only makes the win, and the 24 points they put up more impressive. They don’t win that game that year. And Jimmy G was a big reason for that.

Jimmy G finding his rhythm after a rough opener. Over the last 2 games:

But there’s also an undeniable sloppiness to the team’s play that can’t be ignored. Even before this past week, they committed 20 penalties and had four TD’s called back. Again, the fact those mistakes haven’t cost them a game or kept them from scoring enough is impressive. But that’s kind of like being good at driving drunk — it’s better than being bad at it, but you shouldn’t be doing it at all. If the 49ers keep doing it, it’s going to cost them games. So here’s to hoping Kyle Shanahan impresses that on his team over the bye week.

Nobody had these teams doing anything, at least not after Andrew Luck retired, but here they are.

The Colts lost their starting QB just before the season, yet find themselves tied atop their division, with their only loss coming on the road in OT. Andrew who?

You thought at least one of these teams was good. Now you’re not so sure.

Thud. I’m talking about the sound of Seattle falling to earth against the Drew Brees-less Saints, not the sound of a football meeting Pete Carroll’s face.

Pete Carroll got hit in the nose with a football that required stitches #SEAvsNO #seahawks pic.twitter.com/72aRK8PHow

The Seahawks looked like a soft 2-0 coming in, and then went out and proved it on the field.

Tier 8: Mediocrity At Its Finest

You could convince me one of these teams will turn it around and make the playoffs. Especially if their QB’s name rhymed with Shmardner Shminshew. I’d also accept Schmyle Schmallen.

Of course, Mariota was under constant attack from a rush which sacked him nine times.

What Marcus Mariota sees after snapping the ball. #Titans pic.twitter.com/qlRyevjcFg

I’m not confident Ryan Tannehill would be any better than Mariota, but you have to wonder when we might find out.

So they’ve got that going for them. Which is nice.

Are we sure they’d be worse with a mono-stricken Darnold starting at QB?

I love to toot my own horn about the predictions I get right (and plan on continuing), so I have to come clean when I’m wrong. I thought Fangio and the Broncos’ defensive talent was a marriage made in heaven. But the Broncos are the first team to have zero through three weeks since the sack became a stat, with Bradley Chubb and Von Miller on the roster, and the team is 0-3. It’s early, but Fangio has the look of a one-and-done coach.

They went and did it. They made me give them their tier.

Just look at where the Dolphins are compared to the rest of the league here:

The Phins are making my survivor pool a breeze this year. We might have to split the pot 400 ways.

‘Group Chat’: James Harden Thinks the Media Settles on MVP Narratives Too Soon. Is He Right?