The NCAA Wants to Make an Example of Kansas and Bill Self—Who’s Next? 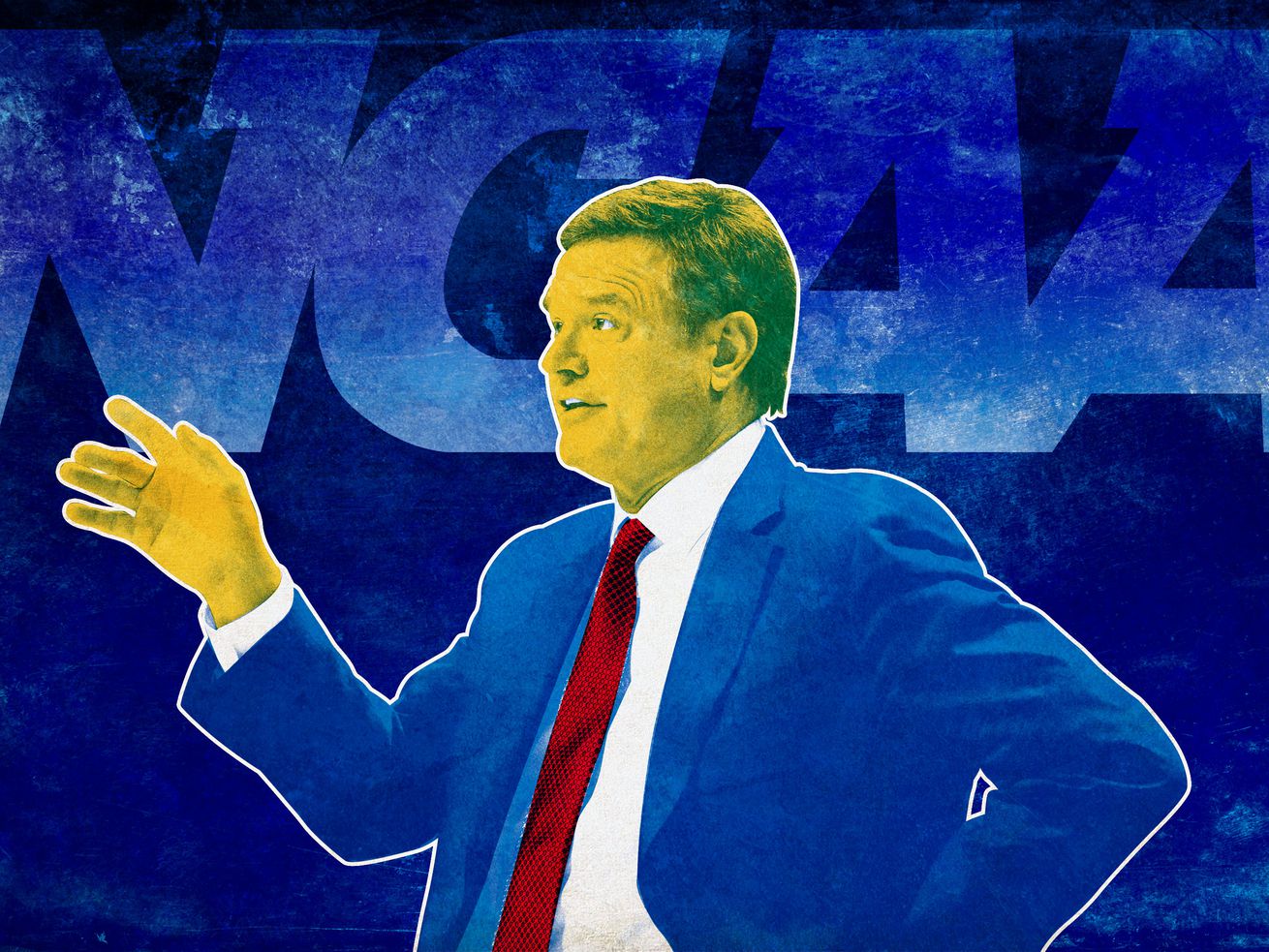 The NCAA accuses the Jayhawks’ basketball program of committing five major violations, including the dreaded “lack of institutional control.” It’s the first blueblood program connected to the FBI’s investigation to receive a notice of allegations.

It’s been two years since college basketball’s supposed reckoning began. On September 26, 2017, the U.S. Attorney for the Southern District of New York announced the arrests of 10 individuals, including assistant coaches at USC, Auburn, Arizona, and Oklahoma State; an aspiring agent; and an Adidas executive, on charges including wire fraud, bribery, and conspiracy. The FBI’s investigation detailed a scheme to funnel cash to college basketball coaches as well as players and their families. The arrests were shocking, not because it was surprising that members of athletic departments and shoe companies were said to have made under-the-table payments, but that such a situation resulted in criminal charges.

On Monday, the NCAA released its first major notice of allegations against a program named in the scandal, announcing five Level I violations (its most severe allegation) against the Kansas Jayhawks basketball program—one of its crown jewels—including three against head basketball coach Bill Self. In June, ESPN reported that six programs expected to receive notices of allegations, and cited five schools—Kansas, Arizona, Louisville, North Carolina State, and USC—that had previously admitted to being the subject of an NCAA investigation. Only one, NC State, had received a notice of allegations before this week. That Kansas is the second is noteworthy. Jerry Tarkanian, the late UNLV coach who waged many a war with the NCAA, once said: “The NCAA is so mad at Kentucky they’re going to give Cleveland State another year of probation.” Given Monday’s news, it feels of a different era.

Pay-for-play in the NCAA has long operated on a don’t ask, don’t tell policy. Schools have long been accused of skirting the rules to recruit players, but the NCAA rarely uncovers a major scandal on its own. High-profile examples of NCAA jurisprudence include Southern Methodist University’s football program, which famously received the “death penalty” in the mid-’80s for using a slush fund to play players. Kentucky’s basketball program was punished in 1989 when $1,000 intended for a freshman was discovered in an envelope. The Fab Five era at Michigan still technically never existed; NCAA sanctions retroactively wiped their achievements from the history books. To uncover these cases, the NCAA relies on whistleblowers or outside reporting.

Pitino’s stunning dismissal seemed to mark the start of a wave of firings across the sport. But so far, he’s the only major head coach who has lost his job as a result of the FBI investigation. Sean Miller denied any wrongdoing at a press conference in March 2018. LSU head coach Will Wade was suspended for the 2019 postseason while the school investigated potential recruiting improprieties related to the FBI investigation, but he was reinstated by mid-April. The FBI probe that many thought would forever change the landscape of college basketball ended with several plea deals and three convictions by jury trial: Gatto was sentenced to nine months in prison, while Dawkins and Merl Code Jr., another former Adidas employee, were sentenced to six months, all convicted of defrauding the University of Louisville, and Gatto of additionally defrauding North Carolina State and Kansas.

The wrecking ball that was supposed to level the sport’s decades-old model of amateurism left minimal damage. The NCAA waited until the government concluded its case before stepping in, and is ready to resume its enforcement role. The first notice of allegations related to the scandal was sent to NC State in July in connection to a $40,000 payment and $6,600 in additional impermissible benefits to top recruit Dennis Smith Jr. The second was Monday’s, sent to Kansas.

After crashing his car the weekend before the 2017 Champions Classic, Preston was held out of competition so the university could find “a clearer financial picture specific to the vehicle.” He never played for the Jayhawks, signing first in Bosnia before going undrafted and playing in the G League. De Sousa, who joined Kansas in January 2018 to replace Preston, was held out all of last season while his eligibility was in question. He was reinstated this spring and is eligible to play this season.

The notice of allegations goes on to say the university was aware that Gassanola and Gatto were present at a preseason kickoff event, but made no effort to monitor their interactions with prospects. And while Gatto’s attorney said Self was aware of the payment to De Sousa, Gassanola testified that Self and his assistants were not. The notice of allegations says Gassanola and Self exchanged text messages about recruits and their efforts to bring them to Lawrence, with Gassanola telling Self he had “let Self down” when a prospect picked a different school. If the levels of violations aren’t lowered upon appeal, Self and Townsend could receive show-cause penalties, which would effectively end their Kansas careers.

Kansas’s notice of allegations comes amid a backdrop of efforts to upend the NCAA’s model of amateurism and provide greater compensation for student-athletes. But the NCAA remains steadfastly committed to punishing programs that violate its rules against paying players. Pitino had been embroiled in several scandals before the FBI implicated Louisville in its investigation. As my colleague Rodger Sherman pointed out at the time, a coach at Louisville requested the payment be “low-key” because of the other NCAA infractions the school was dealing with stemming from other scandals, such as providing prostitutes for players and recruits in dorms on recruiting trips. But Pitino wasn’t let go for that scandal, or any other misdeeds that occurred under his watch. He was fired because while he was the head coach, a player received impermissible benefits.

The NCAA’s decision to zero in on the Jayhawks and Self is significant. Kansas is a blueblood. Its three national championships are tied for seventh most in NCAA history, and its 15 Final Four appearances rank fifth; its first coach was the inventor of basketball, James Naismith. At a time when the NCAA’s authority has been challenged in court, and in state legislatures, its notice of allegations against Kansas acts as a reassertion of its power.

In 2012, the NCAA issued the most severe penalty in its history against Penn State and its football program, levying a fine of $60 million, reducing the number of available scholarships, and banning the Nittany Lions from the postseason for four years. The punishment was extreme, and fell just short of—or just beyond—the impact of the “death penalty” handed to SMU decades prior. In 2013, then–Pennsylvania governor Tom Corbett sued the NCAA, arguing that the governing body was “overreaching and unlawful” in delivering a penalty for a crime that was beyond the organization’s purview. A year later, the NCAA rolled back sanctions against Penn State. In 2017, the NCAA’s jurisdiction was called into question again during an investigation into academic fraud at the University of North Carolina. The NCAA did not issue any sanctions against it, a clear reaction to the fallout of its decision on Penn State.

The NCAA likely would not have chosen to go after a program as prestigious as Kansas with allegations as serious as these unless it felt like it had a strong case. NCAA Bylaw 11.1.1.1 states that if a Level I or II violation is alleged, it is presumed that the head coach is responsible for the actions that occurred. On all three of the Level I allegations levied against Self, the NCAA indicated that a hearing panel could enter a show-cause penalty against him, effectively ending his tenure at the university.

On Monday, Kansas responded to the notice of allegations, stating it would “fiercely dispute” the details laid out therein, and “firmly and fully support” Self and his staff, while Self said the enforcement committee had “created a false narrative.” Kansas has 90 days to respond to the NCAA, and the NCAA then has 60 more to respond in turn. It has 45 days after that to set a hearing, which would mean that, at its earliest, arguments wouldn’t be heard until after the conclusion of the college basketball season. For now, nothing changes. Self is still the head coach, De Sousa is still eligible to play, and Kansas will still be favored to win its 15th Big 12 regular-season championship in 16 years. The NCAA is going after a big fish. Only time will tell if it can catch it.