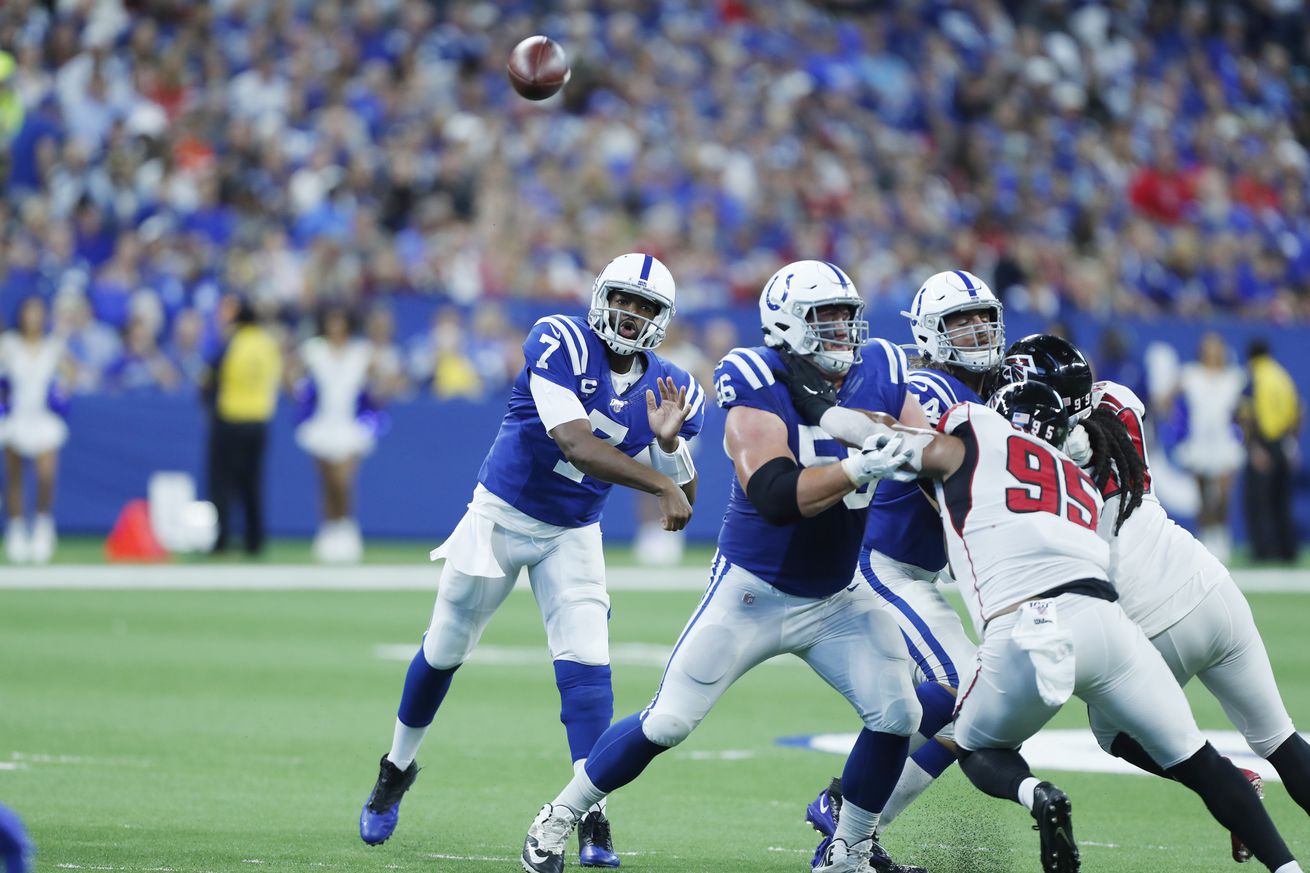 Brissett has improved by leaps and bounds through three games in Indianapolis.

The last time the Colts went through a full season without Andrew Luck, they went 4-12. That won’t happen in 2019.

Jacoby Brissett’s maturation into an above-average NFL quarterback has kept playoff hope alive early in a year that saw Indianapolis’ franchise cornerstone opt for retirement. Through three games, the fifth-year veteran has emerged as a reliable engine for a team that can still fight its way to the top of the AFC South.

The question now is whether he and the Colts can keep this going. If Sunday’s game against the Falcons is any indication, they’ve got a real shot — and the rest of the division should be worried.

The Colts have built a strong support system around their recently promoted quarterback. Indianapolis’ plan to turn Brissett into a potential franchise passer has been to pump up his confidence and weaken opposing secondaries with short passes before unleashing his big arm downfield into single-coverage situations.

Brissett’s average throw only traveled 5.1 yards downfield through his first two games, a mark that ranked ahead of Jets passers Luke Falk and Sam Darnold and no one else. That was significantly less than he averaged in 2017 in Indianapolis (7.3) while trying to drag a flawed team with few weapons besides Hilton to respectability.

This year, head coach Frank Reich and offensive coordinator Nick Sirianni have decreased Brissett’s downfield workload in order to create easier throws in both short- and long-range situations. It worked like a charm in Week 3 in a 27-24 win over the Falcons.

Brissett took what Atlanta gave him with a long list of short passes to start the game, then exploited the adjustments Dan Quinn made. The Colts quarterback began his afternoon with eight straight completions, most of which ran close to the line of scrimmage and took advantage of holes in the short section in the middle of the field. With the Colts inside the Falcons’ 20 on their second drive of the day, Brissett dropped back for his ninth. Atlanta tried to cover up this weakness by sitting its linebackers in zone coverage in the middle of the field.

That did effectively prevent another 5-yard gain on a quick pass to the middle of the field. It also meant wideout Zach Pascal got passed off to a linebacker in coverage as the cornerback shadowing him stepped up to cut off another short route out of the backfield. That left Pascal all alone for an easy six points:

Pascal’s so wide open that Brissett didn’t have to make a great throw to find the end zone (though his is still pretty good); he just had to make the right decision.

Nine of Brissett’s first 11 completions all traveled five yards from the line of scrimmage or fewer. This is a useful way to build up a passer with only 17 career starts under his belt. It also plays off one of Brissett’s biggest strengths: he can absolutely rifle short passes into tight windows. This is especially helpful in the red zone, as he showed with T.Y. Hilton late in the second quarter Sunday.

That goes down in the scorebooks as a rote 4-yard scoring pass, but it needed a grown man throw to get there. Brissett got it done, and those accurate short-range strikes are throws an NFL quarterback needs to make in order to set up bigger opportunities downfield. He has proven he’s capable of sliding passes through those fast-closing lanes when they arise.

Here, his slight underthrow to Hilton keeps his All-Pro wideout’s route from running into double coverage. Brissett trusts his top target enough to adjust to the ball, and the end result is a 26-yard gain ... and a wallop from Ricardo Allen that drew a 15-yard unnecessary roughness call.

Again, a big-league throw from a player who understands what risks he can and can’t take downfield. The outcome of this short-short-short-short-kinda long! performance against the Falcons? A 75 percent completion rate, 310 yards, two touchdowns, and zero turnovers.

That’s a replicable line for a player with the arm strength to launch frozen ropes to either sideline on the run. While he wasn’t infallible against an Atlanta secondary missing top performer Keanu Neal for much of the game — he completed just four of 10 passes that traveled 8+ yards — he was still good enough to push Indianapolis to a 2-1 start while demoralizing the Falcons.

This pushed Indianapolis out to a big early lead. When Atlanta came back to cut that advantage to only three points, Brissett responded with a pair of massive third-down conversions on a 75-yard scoring drive that effectively doomed the Falcons. More importantly, he did so without Hilton in the lineup; the star wideout missed a significant portion of the second half due to a quadricep injury that threatens to pour water on the hottest start of his career.

The Colts’ revamped offense is a major part of this

Two years ago, Brissett was thrown into a brutal situation in his first season as a Colt. He had only 15 days between his trade from the Patriots and his first start with the club. He was then stuck behind one of the league’s worst offensive lines and surrounded by a receiving corps that was effectively Hilton and a handful of fourth/fifth WR types like Donte Moncrief and Chester Rogers.

As a result, the debuting starter was sacked on 10 percent of his dropbacks — a worse sack rate than any other qualifying quarterback in the league in 2017. Though 71.3 percent of his pass attempts were labeled “catchable” by Sports Information Solutions, just 58.8 percent of those passes were completed.

Chris Ballard took over general manager duties before that 2017 season and overhauled both sides of the ball the following year, making life easier for Brissett in the process. The 2018 draft brought two different starters to the offensive line, including rookie All-Pro Quenton Nelson. Prudent drafting also brought in young targets like Parris Campbell, Nyheim Hines, Jordan Wilkins, and Deon Cain. Meanwhile, Eric Ebron, a 2018 free agent, proved to be an explosive addition after a 13-touchdown debut season in Indiana.

In ‘17, 46 percent of Brissett’s passes went to either Hilton or tight end Jack Doyle. Through three games this fall, Hilton and Ebron, the team’s top TE option so far, have made up only 40 percent of his throwing output. Twelve different players have at least one reception this season. 10 players have at least four targets. This ability to share the receiving workload will be crucial should Hilton miss any time due to injury.

Brissett’s sack rate has dropped from 10 to 6.1. His catchable pass rate shot up to 83.6 percent before Week 3’s breakout performance. His passer rating is more than 30 points higher than it was in 2017. These are all numbers that will be vitally important in the Colts’ playoff chase.

There’s still plenty of reason to be wary about Brissett’s strong start. While he was solid in Week 1 against a tough Chargers team, his breakout game came against a Falcons club that’s somehow a lesser sum than all its parts combined. He has yet to take on an opponent who can readily shut down all the short and intermediate routes that open up his passing game and make bigger gains possible. And, as the Raiders have shown, this kind of gameplan is no week-to-week certainty in the NFL.

Brissett was pressed into unexpected duty this fall. While it was nowhere near as abrupt as it was two years ago, it still brought many questions about both the quarterback and his team.

But Indianapolis has given Brissett the tools he lacked in a throwaway 2017 (and a team-friendly contract extension that will keep him in town should he outperform expectations). Now the franchise will get the chance to see if he can keep this pace and establish himself as a worthy successor to Luck. Through three games, he looks like the kind of NFL quarterback who can pilot a team to postseason success. We just need to see what he can do when the degree of difficulty gets turned up a few more notches.

LaMelo Ball is getting No. 1 pick buzz after his first games in Australia

Josh Rosen is starting at quarterback for Miami, what that means for the Dallas Cowboys