Grading the Cowboys 31-6 victory over the Dolphins 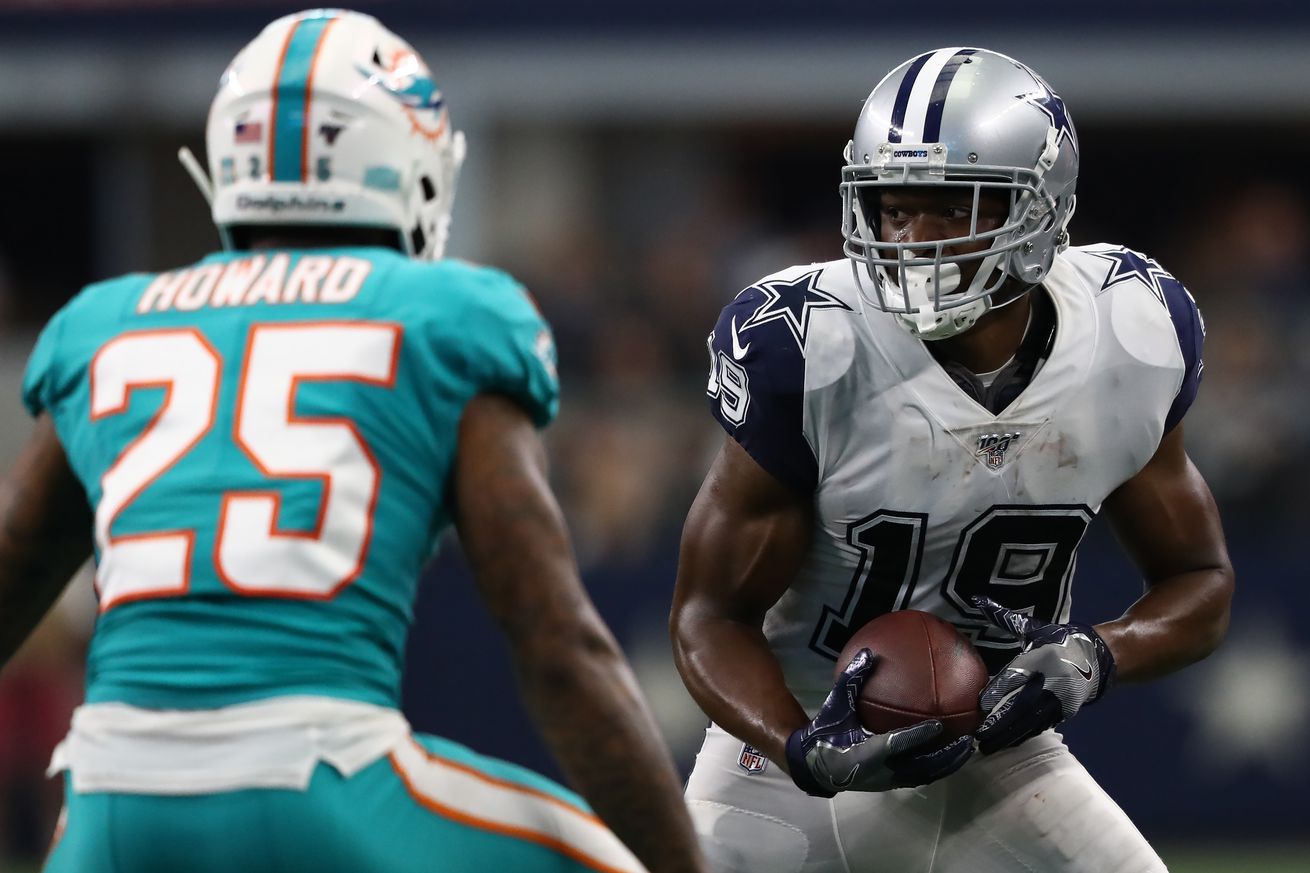 In the end a satisfactory result for the Cowboys.

Your Dallas Cowboys faced a sort of no-win situation Sunday against the hapless Miami Dolphins. The 23.5 point spread meant that even a blowout victory would elicit shrugs, while anything less would open the team to criticism. And that’s largely how this game played out, a 25-point victory that satisfied but also left the team with some things to work on. Let’s go to the grades:

The final numbers all point to a superior team simply playing better than an over-matched opponent. Dallas out-gained Miami by nearly 200 yards (476 to 283). Dallas exhibited an overpowering run game, with Ezekiel Elliot and Tony Pollard each topping 100 yards and Pollard and Dak Prescott both finding the end zone. Dallas ended with 235 yards on the ground while surrendering only 72.

The defense again struggled, allowing the anemic Dolphins offense to generate 220 first-half yards. But they again proved up to the task in the red zone, giving up only three points on three red zone opportunities. The defense then shut the Dolphins down in the second half. Five Miami second half drives netted only 70 yards and no points with 36 of those yards coming on their final garbage-time drive.

The Cowboys second half dominance was unequivocal:

In the end, the Cowboys took care of business and did exactly what they were supposed to do: blowout a clearly inferior team.

One of the major criticisms of the 2018 Dallas Cowboys was their inability to make halftime adjustments. It seemed like every game, regardless of situation, after halftime the offense would struggle and the defense would give up points. Often times, comfortable double-digit leads became nail-biters.

Well, things have changed dramatically. These are the Cowboys third quarter offensive numbers in 2019:

Sunday was no different, as the Cowboys turned an uncomfortable 10-6 margin into a commanding 24-6 lead. Many of us were critical of the coaching staff’s inability to “make adjustments” last year, so if we’re fair about these things we have to give them credit this year.

Jason Garrett and company have also figured out a way to reduce Ezekiel Elliott’s workload and integrate rookie Tony Pollard into the offense. The two combined for 228 yards on 32 carries (7.1 YPA) and added a touchdown.

When you add the running threat that Prescott brings and an offensive line that’s looking much more like the 2014 and 2016 squads than the 2017-2018 squads and Dallas has a very imposing run game.

Prescott threw more incompletions this game (13) than he did in weeks one and two combined (11). Prescott’s numbers could have been bigger but Amari Cooper dropped what should have been a 25+ yard gain and a 74-yard Randall Cobb touchdown was called back on a penalty.

Still, Prescott wasn’t as sharp in the first half as we’ve seen the previous two weeks. A poor decision led to the lone interception, with Dak throwing into coverage when he could have just tucked the ball and picked up some yards:

Prescott seemed ultra aggressive in the first half, often taking deep shots when there weren’t really opportunities there. His second half, however, was exactly what we’ve seen through most of 2019:

He also added his first rushing touchdown on the season:

Dak Prescott continues to play at a very high level.

Sunday was the first time we’ve really seen the Cowboys employ an effective two-headed Elliott-Pollard combination. Zeke doesn’t seem to make too many highlight plays but you look up at the end of the game and he’s got 125 yards again. In fact, Elliott is now averaging 5.25 yards per attempt and is on pace for 1,541 yards on the year. This while averaging 18 rushes per game.

Tony Pollard had his first real opportunity to shine as a Cowboys. He accounted for 128 combined yards, including 103 on the ground. He also scored his first NFL touchdown:

Pollard is averaging 11 touches per game and adds an element we haven’t seen in the Cowboys’ offense since Lance Dunbar’s departure.

Honestly, there was nothing not to like about the running game Sunday.

Overall the numbers were okay for this group, as they accounted for 150 yards and two touchdowns. Amari Cooper had a big day, with six catches and both touchdowns.

Amari Cooper has his third touchdown of the year as the Cowboys are already up 10-0... #MIAvsDAL pic.twitter.com/dNeMDTJOIW

Cooper did, however, have a bad drop on what should have been a chunk play.

Neither Randall Cobb nor Devin Smith made a big impact. Cobb’s biggest play was a 74-yard catch and run for a score that was unfortunately negated by a Connor Williams holding call.

I’ll be honest and say I wasn’t all that enthused about the return of Jason Witten. I’m ready to admit I was wrong. Witten has made big plays in all three games and has solidified a group that was a bit directionless last year.

Sunday Witten didn’t find the end zone as he did in weeks one and two, but he did add a big play when Prescott perfectly executed a scramble where he caught a defender in no-man’s land:

On the season Witten has ten catches on twelve targets for 94 yards and two touchdowns. That adds up to a 139 passer rating. The numbers aren’t huge in volume but they are efficient. Witten has done exactly what those who supported his return hoped: given Prescott a reliable target at the tight end position.

This group easily could have registered an A+ as overall they dominated the Dolphins front seven. Not only did Dallas grind out 235 rushing yards, they also kept Dak clean all day long (Dak’s only sack was his own fault for not throwing the ball away when he had a chance).

It was the kind of dominating performance the highly-pedigreed, highly-paid unit is expected to provide. Unfortunately, it was marred by multiple holding penalties, each which negated big plays:

That’s 104 yards, two first downs and a touchdown wiped out by holding penalties. Perhaps most impressive is that the Cowboys were able to overcome each penalty to score touchdowns. That ability to overcome negative plays on offense was completely absent from this team last year and has been a huge reason for the improved offense.

Honestly, this grade might be generous. The Dolphins offensive line is bad, there’s no other way to describe it. Last week New England recorded seven sacks and held them to 37 yards of offense through three quarters.

So it was very disturbing to see Josh Rosen sitting back with time to take shots down the field. Rosen was hit only once in the first half as he threw threw for 156 yards. The line did better in the second half, recording three sacks and harassing Rosen quite a bit.

Yeah, Tyrone Crawford and Antwaun Woods were missing. But still, this group has not looked very good throughout the first three games of the season and it’s gone from being a head-scratcher to a legitimate concern.

This group played better than last week, when they struggled. Jaylon Smith recorded 10 tackles and forced a fumble, resulting in the only forced turnover on the day:

This was easily the biggest play of the game, coming with only 30 seconds remaining in the first half and the Dolphins on the doorstep of taking a lead before the half.

Leighton Vander Esch added six tackles, a pass break-up and had a nice tackle for loss. Still, this duo has not been the sideline-to-sideline forces of nature we saw last year. We’re still waiting for a breakout game this season from this unit.

Like most of the Dallas defense, it was a tale of two halves for this group. Throughout the first half this group was giving up plays or getting called for penalties. Chidobie Awuzie, in particular, had a difficult day. He was beaten on this play (where, admittedly, DeVante Parker made an amazing catch):

Awuzie was also called for a big pass interference penalty. On the positive side Darian Thompson looked good replacing Xavier Woods at the safety spot. He had a terrific run stop near the goal-line to help prevent a possible touchdown drive by the Dolphins early. Jeff Heath added a big (and legal) hit that, unfortunately, resulted in an Allen Hurns concussion.

One thing about winning games by an average of 17 points is special teams don’t play a big role in the outcomes. Nothing noteworthy happened on special teams, similar to weeks one and two. Brett Maher made one field goal and doinked a 55-yard attempt off the post. The 55-yarder seemed like practice as much as anything as he’s had only three FG attempts all season. He is perfect on his thirteen extra point attempts.

For the third week in a row no punt or kickoff return, either offensively or defensively, made an impact on the game.

No one will care how the first half of this game went when the season is over. The Dallas Cowboys are 3-0 for the first time since 2008. They already possess a two-game lead in the NFC East, only three weeks into the season. They’re winning games without any drama, taking “Landry shifts” three times already this season.

Yeah, the competition has been wanting and, frankly, any team with Super Bowl aspirations would be expected to go 3-0 against New York, Washington and Miami.

But things often don’t go as expected in the NFL (ask the Philadelphia Eagles) and each of those three games was an opportunity for the Cowboys to stumble.

They haven’t. And we, as fans, get to enjoy a third consecutive week celebrating a Cowboys victory.