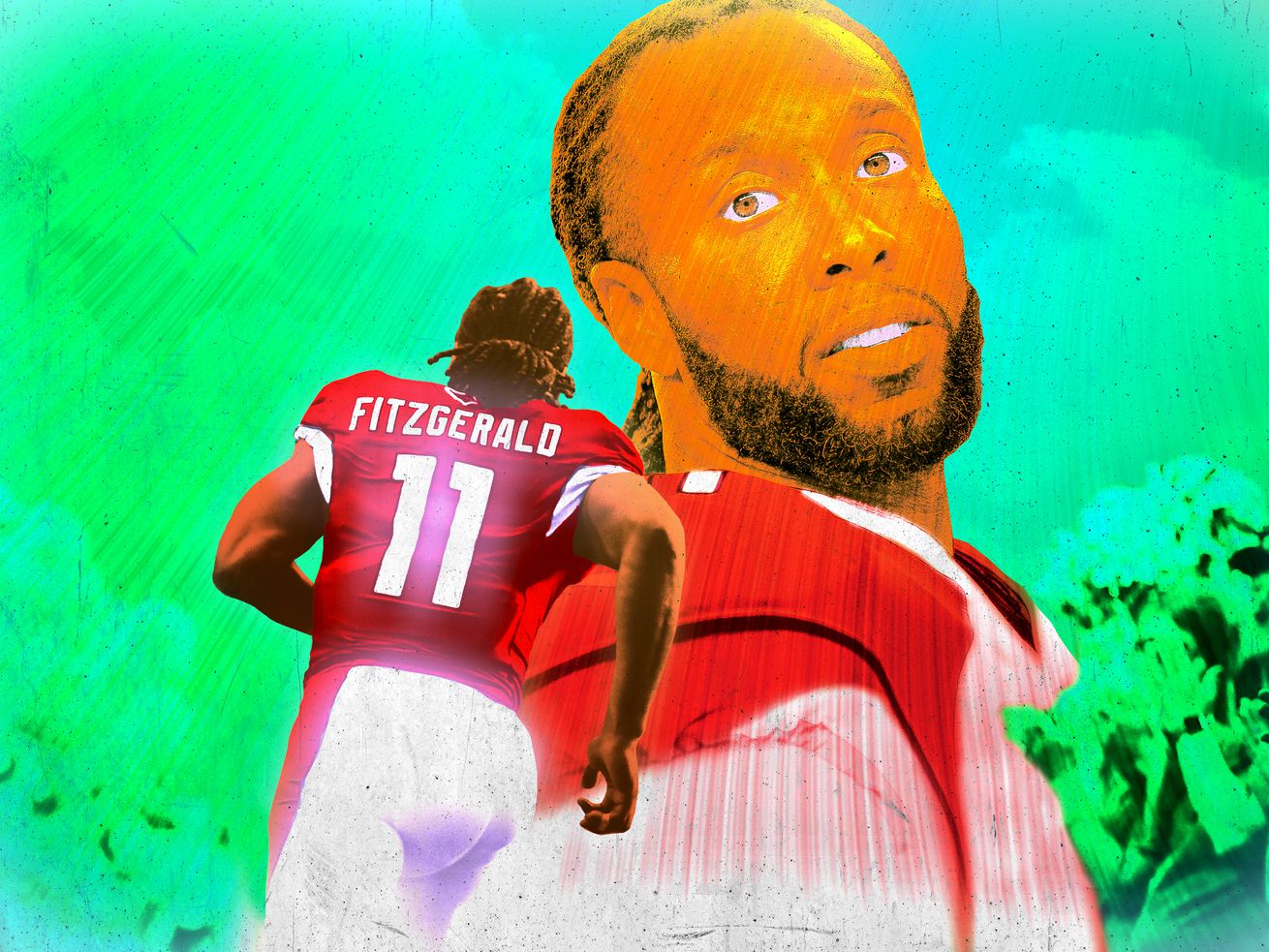 At 36 years old, the legendary wideout is not only still playing, he may be off to the best start of his career. Fitz is thriving in Kliff Kingsbury’s wide-open scheme, and in return he’s giving rookie Kyler Murray a reliable veteran presence down the field—it’s a perfect match.

The Cardinals are pushing the limits for modern NFL spread offenses under head coach and play-caller Kliff Kingsbury, and through two weeks, Arizona’s Air Raid–infused scheme has used four wide receiver formations at a rate not seen since the the Houston Oilers’ vaunted run and shoot offenses of the early 1990s. Arizona’s employed 10 personnel—a four receiver, one running back set—on a league-high 87 plays this year, a 64-percent clip that far outpaces the second-place Rams, who’ve used that grouping on just 11 percent of their plays.

If veering off the league’s schematic beaten path wasn’t difficult enough, though, Arizona’s doing it with a largely young and inexperienced group: Led by first-time NFL head coach Kliff Kingsbury, the Cardinals are leaning on 22-year-old rookie quarterback Kyler Murray, who’s throwing a big chunk of his passes to 22-year-old receivers in Christian Kirk and KeeSean Johnson, and 26-year-old Damiere Byrd, who had just 12 receptions on his résumé prior to signing with the team this offseason. A late preseason addition in 32-year-old Michael Crabtree brought some much-needed veteran experience, but through two games, it’s clear that the glue that holds the nascent Arizona passing game together is Larry Fitzgerald. The 36-year-old future Hall of Famer—who’s just four years younger than Kingsbury—hasn’t just been the veteran leader this young group desperately needs both on and off the field, but he’s off to the best start of his storied career.

Arizona’s offense has impressed in its last five quarters (plus an overtime period), but that group stumbled badly out of the gates in its Week 1 matchup with the Lions. Through the first three quarters of that game, the Cardinals picked up just five first downs and averaged a paltry 2.4 yards per play. Murray completed just nine of 25 passes for 70 yards and an interception (registering a grimace-worthy 27.9 passer rating) in that stretch, and when the Lions scored a touchdown early in the fourth quarter to take a 24-6 lead, it gave Detroit a 98 percent win probability, per numberFire. It was hardly the start Kingsbury and Co. were looking for.

Things somehow looked even more bleak at the start of Arizona’s subsequent drive, when Murray’s offense quickly found itself backed up into a third-and-14 at its own 22-yard line with 13:41 to go in the game. The Cardinals were desperate for someone—anyone—to make a play. Fitzgerald delivered. With the offense in its signature four-receiver set, Murray dropped back and heaved a rainbow downfield, leading Fitzgerald away from coverage and toward the sideline. The reliable playmaker turned his head, found the ball, and laid out to reel it in, securing the pass against his body as he crashed into the turf for a 41-yard gain.

The near-miraculous grab was like a defibrillator shock to the team’s previously listless unit. Arizona got a field goal out of that drive, then marched down the field to score touchdowns on its next two possessions. This 4-yard touchdown pass from Murray to Fitzgerald (along with a two-point conversion) helped the Cardinals tie the game up at 24 and force overtime.

Fitzgerald was the catalyst for the team’s scoring drive on its opening possession in overtime, going deep again to reel in a 45-yard bomb on the team’s second play. That set up a Zane Gonzalez field goal.

The two teams battled it out the rest of the overtime period to end the game 27-27, and while it wasn’t a win like the Cardinals had hoped, that late-game surge carried over to their tough road matchup against the Ravens in Week 2. Instead of wilting under the pressure of Baltimore’s talent-packed defensive unit, Arizona’s Murray-led offense went nearly punch-for-punch with Lamar Jackson and the Ravens in a hard-fought 23-17 loss. Fitzgerald built on his eight-catch, 113-yard performance in Week 1 with a five-catch, 104-yard output in Week 2. He was again a crucial performer on a pair of Cardinals second-half scoring drives, including this 40-yard gain that helped lead to a Gonzalez field goal:

And this 54-yard catch and run that helped set up a David Johnson score:

Thanks to the much-needed big-play connection Murray has developed with Fitzgerald, the Cardinals offense is trending in the right direction. Since that woefully slow start, Murray has completed 45-of-69 passes (65 percent), for 587 yards (8.5 yards per attempt), two touchdowns, and no picks in the team’s last five quarters (plus OT).

Fitzgerald has brought more than just reliable hands, physicality, and the ability to create a big play downfield to the team’s pass-catching group, though. His savvy and experience reading defensive alignments has paid dividends for Murray, who has the power to change plays and individual routes.

”I think every young quarterback needs a security blanket—him being that guy for me,” Murray said this week. “He knows what he’s seeing out there.”

As Smart Football’s Chris Brown points out, Murray sent a quick hand signal to Fitzgerald on this second-and-2 situation in the first quarter against the Ravens last week, changing the play based on the defensive coverage. Fitzgerald ran a quick out from the slot and Murray hit him for a first down. Fitz is still as automatic as anyone when the ball is anywhere in his vicinity.

That veteran experience and “throw it to me and I’ll come down with it” dependability has been crucial for Murray’s early-season development and, in turn, Murray has helped turn the clock back for the aging vet. In the Cardinals’ wide-open, pass-heavy scheme, Fitzgerald is posting some of the best numbers he’s ever had through two games. Fitzgerald is a slot machine (with 94 percent of his routes originating from that spot), and has racked up an NFL-high 20 targets, 12 catches (second), and 177 yards (first) among players lining up in that alignment this season, per PFF. For the first time in his career, Fitzgerald has posted 100-plus receiving yards in each of the season’s first two games, and his 217 yards so far is his second-highest total after two games.

Fitzgerald has played with a lot of quarterbacks in his long career, creating big plays for the likes of Josh McCown, Kurt Warner, Matt Leinart, Derek Anderson, Kevin Kolb, John Skelton, Ryan Lindley, Carson Palmer, and Josh Rosen, along with a handful of short-lived others. He’s racked up an incredible 1,316 catches (third all time) for 16,496 yards (second) and 117 receiving touchdowns (sixth) in the past 16 years and change. But he’s flirted with retirement on a number of occasions, and in 2018 caught just 69 passes for 734 yards, both lows for Fitzgerald in seasons during which he played all 16 games since his rookie year. It wouldn’t have shocked me if the wily vet had taken a back seat to some of the young playmakers on the Arizona offense, served as a mentor, and taken on a rotational or even reserve role in what’s shaping up to be a transitional year for the Cardinals. But right now, Fitzgerald is not just the team’s top pass-catching target, he’s playing with the pep in his step of a receiver who could be Murray’s go-to guy for another 10 years.