Film room: The 49ers offense can, and should, create plenty of problems for the Steelers defense 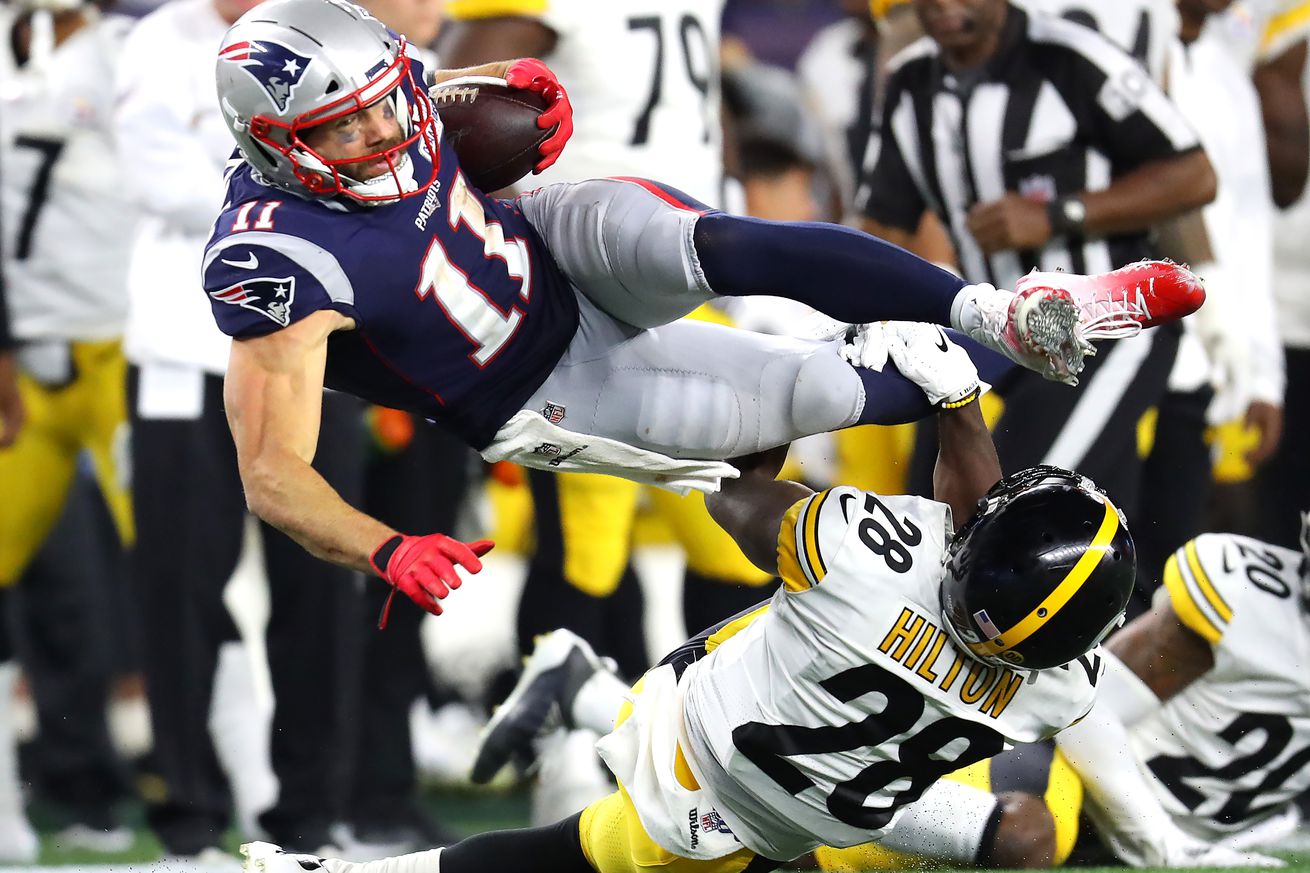 Through a combination of crossing routes, attacking the seam, and speed on the edge, the 49ers offense can exploit key weaknesses in the Steelers defense

This week the Steelers bolstered an already strong defensive unit by trading for Miami Dolphins defensive back Minkah Fitzpatrick earlier this week. In the offseason, they added Mark Barron and drafted Devin Bush. The results have been mixed. In week one, the Steelers defense looked lost against the Patriots. In week two, they clamped down on a Seahawks offense that appears not to be as good as originally thought.

Positionally, the Steelers have one of the best young edge rushers in the game with TJ Watt, who has nine total pressures in two games. The strength of the Steelers is their front four, with four players in the top five on their defense receiving the highest grades per Pro Football Focus. Steven Nelson and Artie Burns have been good at the corner position, but the rest of the coverage grades take a sharp drop after that.

So where can the 49ers hope to exploit some of these weaknesses? By relying on crossing routes, attacking the seam, attacking the edge of the defense, and getting the running backs involved in the passing game.

Attacking man coverage with over routes and shallow crossers

If there is one thing Shanahan’s playbook as plenty of, it’s crossing routes, over routes that allow receivers to get separation against man coverage. One way they can do this is with the use of mesh crossers. Per Mark Kaboly of The Athletic Pittsburgh (paywall) the Patriots recorded six receptions for 86 yards and one touchdown.

Against the Steelers, the Patriots are running the “Yankee” concept similar to Shanahan’s with the condensed formation and the two receiver combination consisting of a deep go-route on one side and the deep over route on the other. Brady fakes to the running back and drops back to pass. The run fake sells the play action and gets the Steelers linebackers cued to the run.

Receiver Julian Edelman is running the deep over route with Phillip Dorsett is running the clearing route down the seam that occupies the deep corner and safety. The corner over Edelman bails as soon as Edelman starts across the field. There are no defender’s down the seam, and Brady completes an easy throw to Edelman for 24 yards.

Similarly, the 49ers can and have in the past, utilized this to great effect. The Steelers back seven does not have anyone with the lateral speed that can match George Kittle or Marquise Goodwin running across the field.

Against Cincinnati in week two, the 49ers used play-action more effectively than they did in week one. This play, similar to the one the Patriots run above, is Shanahan’s “rider” concept. The play-action draws in the second-level defenders and gets the strong safety to step toward the run action. This allows receiver Marquise Goodwin to get across the field with virtually no one covering him since Richie James has occupied the attention of the deep corner and safety.

Another way the Patriots were able to scheme guys open was through the use of shallow mesh crossers.

The Patriots are known for the infamous pick plays that involved receivers that cross at some point in their routes progression, whether it’s through a switch release, slant-flat combos, or shallow crosses. Brady motions running back Rex Burkhead into the formation a bit closer to make the pick release easier to execute.

As Burkhead releases underneath the slot receiver, the slot receiver sells an out-breaking route right into the path of Burkhead’s defender but doesn’t initiate contact, so the play is legal. Receiver Josh Gordon is coming from the other side on a shallow cross as well, and as Burkhead’s defender, John Simon goes around the traffic to avoid a collision, Burkhead springs free after catching the pass.

These are effective routes against man coverage. In week one, Tevin Coleman caught a pass that he took for 32 yards on a mesh crosser. Against the Steelers man coverage principles, these types of plays should be open for the picking.

Garoppolo audibles to a 3x2 shotgun empty formation to run the mesh concept. On the mesh crossers, Coleman is crossing from the right, and fullback Kyle Juszczyk is crossing from the left. The Buccaneers man coverage gets caught chasing the crossers and the defenders covering Coleman, and intermediate routes collide due to the tight quarters of several different players. This springs Coleman wide open where Garoppolo hits him for a 32 yard gain.

Attack the seams and go at Devin Bush

Seattle took advantage of the Steelers generally weaker overhang defenders, particularly in the red, where tight end Will Dissly had two touchdowns in their victory over Pittsburgh.

The Seahawks were in 11 personnel with trips to the left and Dissly as the inline tight end to the right. With Wilson in shotgun and running CJ Procise to his right offset, he sends receiver Tyler Lockett in motion to the right to a 2x2 formation and revealing that the Steelers are in cover-1.

Linebacker Mark Barron comes off the edge, creating a five-man rush. Prosise clears out the throwing lane for Wilson and Lockett occupies the corner as Dissly is matched-up on rookie Devin Bush (No. 55). Wilson lofts a pass up to Dissly who goes up and high points the ball over Bush in the end zone for the touchdown.

In the second clip in the video above, the Seahawks again went at Devin Bush down the seam with the same concept as the first touchdown, but this time the formation was flipped, and Lockett’s return motion stayed to the strong side instead of coming across the formation.

Strong safety Terrell Edmunds runs with Chris Carson out to the flat, making Dissly Bush’s responsibility due to the coverage rules that dictate “hot to” responsibilities. Since the Steelers sent a five-man pressure, the defenders have to rotate to the passing strength to cover for the man that isn’t there. Since Edmunds is the “hot to 2” defender, Bush must take Dissly up the seam and get over the top faster than he did. Wilson finds Dissly in the zone at the goal line for his second touchdown.

If Dissly can beat Bush down the seam, then Kittle definitely can. He has the speed to outrun everyone on the field.

This play, from 2018, shows what Kittle can do down the seam. Against a cover three shell, the 49ers are running verticals concept designed to put the safety into conflict. Kittle is running the deep “stick-nod” route where he takes a quick step outside, then cuts back up the field, putting the safety in conflict.

As Kittle is running the stick-nod route, quarterback CJ Beathard is looking off safety Jahleel Addae. As Addae gets turns the “stem-go” route on the boundary side of the field, Beathard turns and throws to Kittle running open up the seam. Kittle catches between three defenders, and it’s off to the races for the speedy tight end as he out-runs the safety and cornerback chasing him for an 82-yard touchdown.

Both the Patriots and Seahawks had success running the ball against the Steelers. And both teams did so by attacking the perimeter. The 49ers will likely do the same.

One way the 49ers can attack the perimeter without the base outside-zone running play is through the use of the fullback lead zone toss or crack toss with a crackback block and an offensive lineman out on the edge. Here the Patriots line up in 20 personnel (two running backs, zero tight ends) and run a crack toss to the right.

The Steelers are in man coverage, so the #1 receiver takes his defender out of the play by running him across the formation. This allows the tackle and fullback to get out on the edge outside of the crackback block to spring Burkhead for an 11 yard gain.

The 49ers have relied heavily on the zone toss or crack toss, especially against teams that play a big nickel with a third safety, as the Steelers have done in the first two weeks of the season. The edge runs against big nickel can get fullback Kyle Juszczyk out on the edge against defenders not as capable of taking him on due to their speed and size.

If the defense aggressively pursues the edges, the 49ers can come right back with a zone toss that allows the running back to hit the lane to the inside of the defenders setting the edge, which is why the outside zone running play is so effective, as the Seahawks also show below.

The Seahawks are running mid-zone as the aim point seems to be the tackle rather than the extra tackle in the tight spot (B vs. C gap). The principle is still the same, and the cut lane principles are the same as well as Chris Carson cuts up inside the two defenders who came down to set the edge. The zone run is very effective against the defensive line “bubble,” the area where there is an uncovered offensive lineman.

The 49ers are fullback lead zone here to the right. The bubble is over right tackle Mike McGlinchey. When the snap goes off, there is no gap penetration in the B-gap next to Person because the linebackers are ultimately responsible for the bubble.

Since they’re coming from the second level, Juszczyk is able to take a better angle than an offensive lineman would be able to because he is moving vertically rather than laterally. Nick Vigil (No. 59) is the bubble defender and immediately is washed out of the play as Breida cuts off the inside of his fullback for an 18 yard gain.

Shanahan is very adept at identifying the defensive weakness and attacking it until the defense shows they can stop it. He’ll likely get Kittle more involved in the passing game against inferior defenders and will likely make the defense play laterally, something the Steelers do not do very well.

It is unclear how much Minkah Fitzpatrick is going to play this weekend but his presence in the secondary certainly changes things a bit but Shanahan will likely have answers for that too. They’ll need to execute the game plan similar to how they did in Cincinnati: by limiting their mistakes and confusing the Steelers with different motions and personnel sets.